“Parting is such sweet sorrow…”

Juliet’s words as she bids Romeo adieu are some of the most often quoted of the Bard’s 250,000 word vocabulary. And imagine, Shakespeare didn’t have the aid of the internet!

Those famous words kept coming to mind this weekend, as I sent my son, Kevin, on his way to Thailand and Japan, where he will be back-packing for 2 months–halfway around the world and so achingly far for the maternal umbilical cord to connect. 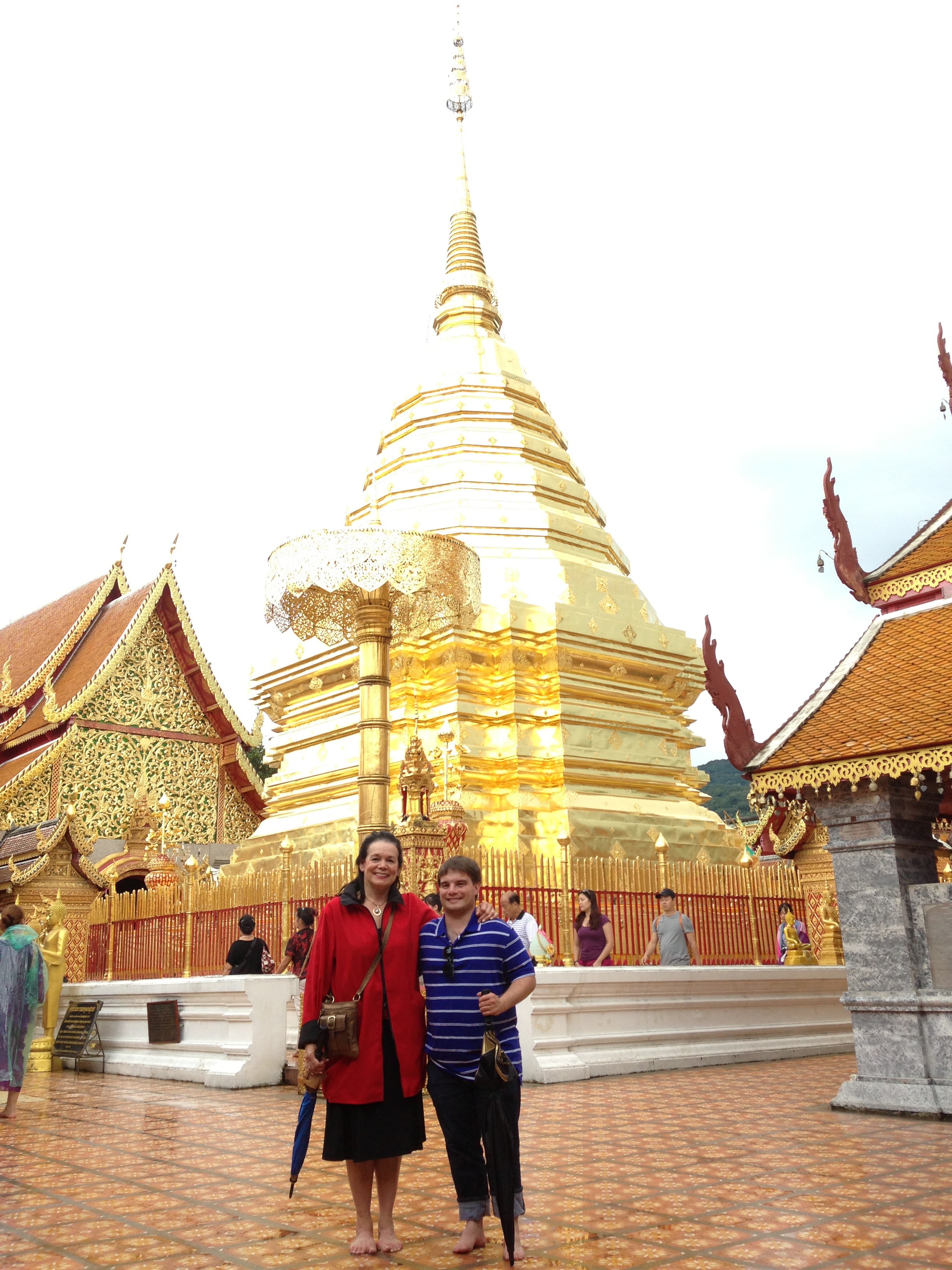 It does help, however, that I have been there with him before, and I can picture the Thai people welcoming him with hands folded and saying, “Sawadika.” Although they bow to everyone, Kevin was especially venerated in his profession. For, contrary to the more “developed” U.S.A., Thailand holds the teaching profession in very high regard. Master Kevin, as the young ten-year-olds addressed him, taught there from October 2013 to June 2015, and I made three visits.

We once celebrated my husband’s birthday atop the famous 96-story “Lebua” terrace  (think “Hangover” movie).

Don’t attempt these stairs if you have a hangover!

My first trip was in 100-degree heat, but the night of December 23rd was atypically cool. Prepared with three layers myself, I lent my raincoat to my newly married but shivering son-in-in-law, and when I returned from a visit to the ladies’ room, Ted had my pink shawl around his shoulders. The irony of this, dear reader, is that I am forever teased by my family that I go overboard packing, and my suitcases are too heavy. Instead of saying: “See I told you to pack more,” I very lovingly and maternally loaned my layers without complaint–well, at least not during the birthday dinner.

My first trip there, I followed Kevin after our daughter’s wedding in Italy to help him find a place to live and, hopefully, a job–which he secured with his first interview!! He took me to Lebua at midnight. It was packed with 20 to 30-somethings, and he sweetly led his ??-something mom up to the bar through the tightly packed crowd, which I thought dangerously large for this tiny, teardrop-sized space suspended in mid-air. I felt the slight sway of the 96 floors heaving in the heat. I was not only lightheaded  from the dangerous trek down those famous stairs, but hotter and stickier than any St. Louis heat had ever rendered me. Combined with my claustrophobia (I have to sit on the aisle seats in airplanes, and even a turtle neck makes me panic!), I had to retreat inside. Sweet Kevin, always thinking of others and not himself, very solicitously left the young and vibrant crowd to accompany my cosmo and me inside. Besides, I don’t think he would approach a girl and say, “I want you to meet my mother.”

We had a “sweet celebration” when Kevin invited his “sparring partners” to a night at the Central West End bar: Scapegoat.

No wonder he spent so much time at the gym!

I had never met any of his martial arts and jiu jitsu buddies. He has been going to his favorite gym near Tower Grove Park for the year and a half he has been home working on his double Master’s in English, and English as a Second Language. Ted and I were honored that he wanted to come back home to live with old Mom and Dad, until he said he did it: a) to save money, and b) because it would make him want to get out sooner! Thanks, Kev! I loved having him home. Since I like to sleep in, he would have eggs ready for me in the morning. And when he came home at night, I made sure to have his favorite take-outs ready for him. I didn’t want to waste time in the kitchen, because we often had a movie night planned. Ironically, he loves the same Italian classics I watched with my mother, who he never even met.

I was proud of myself that there were no tears as Kevin left the house Saturday morning.

His brother Bob didn’t want to say goodbye yet, and literally took him under his wing by 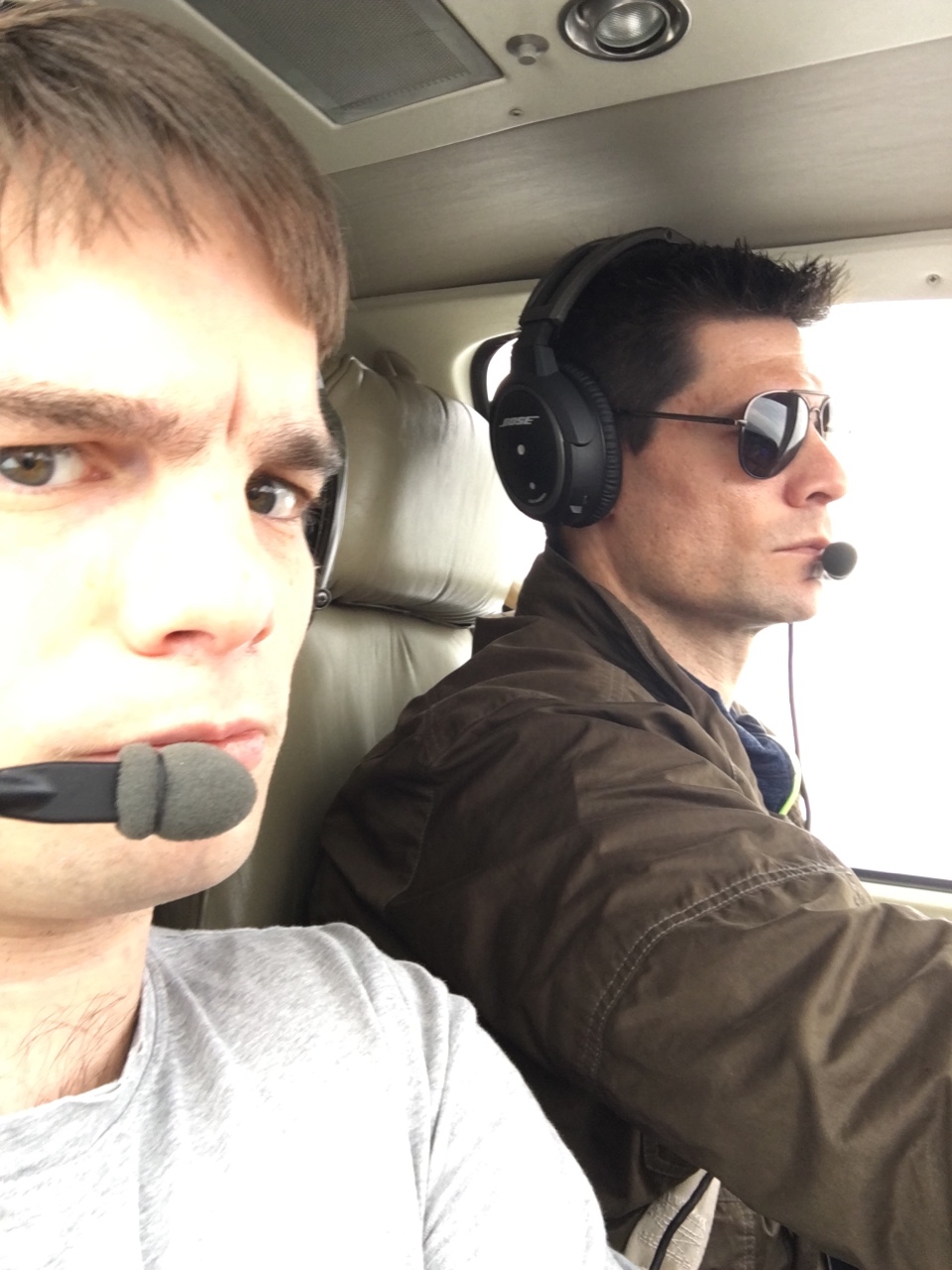 This is ground control to Major Bob.

flying him to Chicago for a night of partying with his sister, Emilee. My husband (see “My Valentine” from last week) who loves to surprise everyone, had already checked flights to Chicago. “There’s one at 4:45, and we can fly up and surprise the kids.” I quickly vetoed that idea, saying (once again) the REAL and better surprise will be if we parents do NOT show up. All siblings need time alone together. They need to relax and be themselves, without the reproachful glances of their parents, having the freedom to engage in their age-old favorite pastime of making fun of us.

It was another “sweet” parting for Kevin in Chicago, as everybody headed out for ice cream

and he helped his niece pack up her 200 boxes of Girl Scout Cookies to ship off to her “clients.” Yes, her troop won the prize. My granddaughter is destined for sales one day–that is after she attends medical school, according to her father. Luckily, our minimalist packer left room in his backpack to slip in a box of Samoas for the long plane ride.

On Sunday, as Kevin flew from Chicago to Beijing, and we were feeling down, our dear friends Rosemary and Jack came to the rescue. They picked us up and whisked us away to the Missouri wineries, where we toasted Kevin’s departure with the sweetness of the grape.

Bon Voyage Kevin! We love you.

While Kevin was watching the sunset over Antarctica 30,000 miles high (his dad followed his flight on his iPad, watching a real-time picture of what he was seeing from the plane–CREEPY), the four of us enjoyed the same sun going down halfway around the world from him, over the hills of beautiful Missouri.

While writing this at Kevin’s favorite coffee shop–quiet today because of the President’s Day holiday– he surprised me with a FaceTime call (the ONE and only thing that I thank Apple for) from his Bangkok airport hotel, where it was 1:30 a.m. to our 12:30 p.m., and he was about to get a good, long rest after reading and writing during most of his 17 hours in the air.

Or so I thought. I didn’t know, when he was pleading fatigue to get off the phone, that his sweet friend awaited him downstairs in the main terminal at the Bangkok airport.

Now he is somewhere on a secluded island, South of Thailand, relaxing with a beer and his book on the beach. And I am sitting in my kitchen, finishing this post at 1:00 a.m. Tomorrow, I will fly North to Chicago to a very populated house of 4 energetic children, playing Grandma for a long weekend while my daughter and son-in-law take a much- needed weekend break to share a sentence or two. Only a grandmother has the wisdom of time to know how quickly they, too, will fly the nest. And when my daughter calls, crying as they head off to college, I will tell her that love means having to let go, and remind her of Shakespeare’s words: “Parting is such sweet sorrow.”